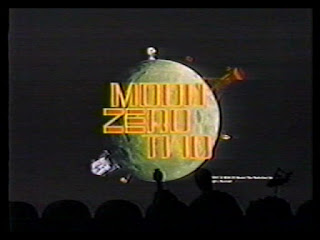 Moon Zero Two is one of the more positively thought of films featured on the show, though maybe my sensibilities are a bit different, but I can’t really fathom why.  This movie reduces me to tears, as it’s such a haphazard scattershot production of things that could work mixed in with things that don’t.  It’s textbook example of throwing crap at a wall and seeing what sticks.  The sets and costumes are pleasurably colorful, but look like a padded special-ed take on the future.  Humor holds traces of wit, but is delivered with the subtlety of Hee Haw.  Ladies are often shaking their money makers in skin-tight costumes on stage, but the only reason you’d hand dollar bills to them is for the same reason you’d hand one to a homeless man.  The movie even starts with a cartoon with groovy tunes, but the cartoon isn’t cute and the song grows grating.

As for story, it’s hardly interesting.  There’s some ho-ha about mining and claimjumping on a moon colony.  It gets wackier as it goes on, featuring a goofball zero-gravity fight sequence and some lackluster space-gunslinging.  It wears a certain 60’s kitsch to help enhance the surrounding lunar lunacy, and some might think that’s enough, I find myself wanting more.

Moon Zero Two is a thoroughly unenjoyable experience.  It offers rancid, brain-melting boredom with no actual sense of entertainment value to fuel its shenanigans.  It does tries to please aesthetically and could succeed if it applied itself more, but it fails miserably and looks dimwitted and clueless in the process. 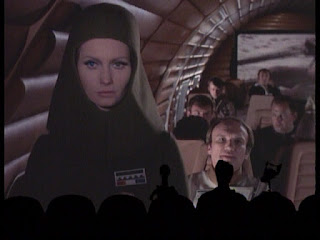 As stated, I’m one of the few people who is resistant to this movie’s “charms” (I’m told it has them), and it’s mildly dismaying that Joel, Servo, and Crow seem to fall for them.  They are fairly low key during this episode, seemingly enjoying the movie and swimming with the current, trying to enhance what enjoyment factor the film might have.  If you enjoy the movie, you’re probably going to enjoy this episode.  I despise the movie, and as a result the episode is a massive slog.  Moon Zero Two is a black liquorish episode.  Some people are going to love it, some are going to spit it out and toss it in the garbage.  This is especially disconcerting seeing how it’s an episode from the sparse first season, which is the most “black liquorish” season of the series.  But let’s face it, enjoyment of the film relating to enjoyment of the episode is par for the course in this season, so it’s not a huge surprise that this is the case.

The host segments don’t do much for me either.  The moon landing re-enactment is attempting to be delightfully awkward, but just ends up awkward.  The “Games of the Future” is a total snooze, and to a lesser extent is the sequence-mocking zero-G fight (though the cute final visual gag is neat).  For the most part these segments are taking inspiration from a film that offers pretty much no inspiration.  Even the Invention Exchange proves lackluster, with Joel demonstrating lame visual gags and the Mads just showing off toothpaste.

To be blunt, Moon Zero Two is a hard episode for me to review.  I get absolutely nothing out of this episode.  I hate the movie, the riffing is lackluster, and I feel like a hollow lump watching it.  Others have an opposite experience with this one.  This is far from the only episode that I seem to be on the opposite end of the spectrum on (there’s a select third season episode that I feel exactly the same about, and a certain tenth season episode that I enjoy far more than the norm would imply).  Like a lot of things in film and television, it’s one of those things that some will enjoy and leave others scratching their heads (hell, MST is the epitome of this reaction). 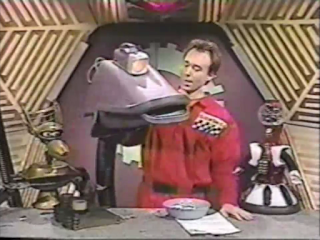 Moon Zero Two rockets to DVD on the 25th Anniversary Edition set, with great video and audio.  Special features are bountiful as well, kicking off with an introduction by Hammer historian Constantine Nasr.  Nasr has so much love for the films of Hammer that I almost wish he were talking about one of their better movies, but unfortunately this is the only Hammer flick MST ever did.  He’s apologetic for it, but upfront about how lame it is, citing a poor script but pointing out the hard effort of the production.

Up next is part one of the multi-part documentary Return to Eden Prairie.  This one is entitled “The Crew” and it covers sets and props, with interviews with set designer Jef Maynard, propmaster Beth ‘Beez” McKeever, and art director Patrick Brantseg.  They go into wonderful detail about designing the homemade look of the show with neat little tidbits.  A good amount of time is spent on the constantly shifting setting of season eight.

Finally is a trailer for the film itself. 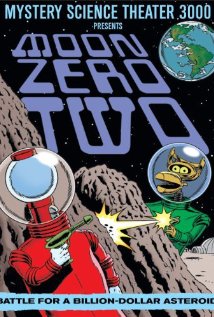