A Girl Walks Home Alone at Night (The Last Drive-In) 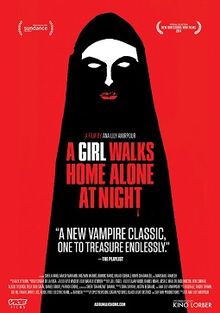 I don't get to review many art films on this blog.  I probably shouldn't, because I'm nowhere near smart enough to comment on them.  It's that old saying:  "I may not know art, but I know what I like."  A Girl Walks Home Alone at Night is a more abstract and expressive than your average monster movie, but I'm mainly watching it because it's a monster movie.

But hey, it's a well made vampire romance story.  Who'd have thought that could have been done?

Ignoring the elephant in the room, if you know what I mean and I think you do...MOVING ON!

A Girl Walks Home Alone at Night is the story of a vampire girl who haunts the streets at night and preys upon bad people or just people who piss her off in general.  She finds herself attracted to a boy and resists the temptation to feast upon him, and begins to feed on those who wrong him.

This movie was apparently funded through Indiegogo on a budget of $56,000, it was filmed in the US, but takes place in Iran and it's spoken language is Persian.  Filmed in glorious black and white (how I love black and white!), I actually enjoyed taking the time to watch this film.  It's slower and more thoughtful than your traditional vampire flick, but it's sort of unspoken romantic tension will glue certain viewer to their seats, while those with a love for creature features will be pleased with how well done, moody, and tense the vampire sequences are.

If I were to say something against it, I feel sometimes the movie lingers too long after the audience has already let a sequence's point sink in.  Scenes can sometimes drag because I suspect the director wants to revel in them even more and assumes the audience does as well.  I've always preferred more efficiency in films I watch, but that's not to say that those won't admire what's being done here.  It's just a tad too meandering for my taste, even if it is well done.

But for those looking for a different kind of vampire movie, closer to Let the Right One In than Salem's Lot, could do a lot worse than A Girl Walks Home Alone at Night.  You just might find yourself sucked into it. 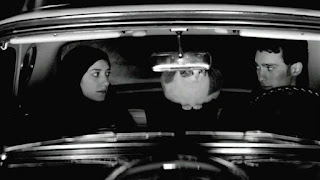 "How do you know when a vampire is in love?  When she has a whole neck handed to her on a platter and she just wants to snuggle."

I imagine there are some out there who don't want to see Joe Bob showing art films without exploding heads, but if you can accept that A Girl Walks Home Alone at Night is being featured on this week's The Last Drive-In, you may find that Joe Bob has some great material for it.  These are probably some of the best bumpers Joe Bob has provided the show yet!

Joe Bob in particular has a fascination with director Ana Lily Amirpour, and enjoys sharing her quirky personality.  One of the best segments of this episode is just Joe Bob reading a list of quotes by Amirpour on her film, and each is weirder and more mind-boggling than the last.  He talks about her claims of "living like Bruce Lee" and having said she leaned directing by watching the music video to Thriller.  It's like she's this enigma that he's trying to figure out.

He has a few cast notes, but he mostly likes to comment on the film itself, with little "only Joe Bob" notes on how the vampire love story plays out, including pondering whether vampires can have sex.  He also gives little noted details, such as the pimp in the film having a face tattoo that says "Pussy Stretcher," which Joe Bob then tests Shudder's censors by repeating as much as possible, then stating he's probably going to get in trouble for it.  Luckily he doesn't work for TNT anymore.  Of course, all Joe Bob fans on social media exploded with #PussyStretcher in the aftermath of this segment.  It was worth it.

A Girl Walks Home Alone at Night may not be a typical Joe Bob offering, but it's one that I think I'll find myself revisiting down the road because it features Joe Bob at his most hysterical.  From rants on nunchaku to trying to address the balloon scene, but giving up before saying a word, this is a must see episode.  I'd dare even say it might be my favorite so far.

Okay.  One for the road:  #PussyStretcher 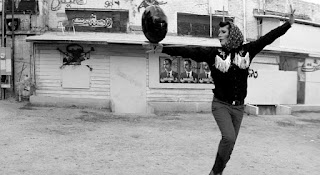