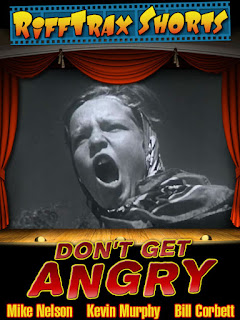 This education on emotions tells of Susan, a little girl who gets bent out of shape on someone stepping out of turn while skipping rope.  Because of this, Susan flies off the hinges and no one is safe from her anger.  There is also a subplot about a boy named Paul who is mad that his friend (who looks like he's at least seven grades more advanced than Paul) is playing baseball instead of playing airplanes, leading Paul to turn into a hulking green rage monster.

How might have all this been solved?  Apparently Susan should have told the object of her anger "Hey, you're pissing me off, bitch!" and Paul should have gone into a gym and pretended the punching bag was his friend's face.  Problems solved!

The point of this particular short is to get kids to externalize their emotions and not keep them bottled up.  It's a good attempt at a message, but I think more effort should be put into healthy expression.  Paul's lesson, for example, is to pretend a punching bag is his friend and to just let out his anger on it.  That's all well and good, but pretending to beat up a friend still is something of a questionable violent outburst.  The way Paul lets off steam doesn't necessarily need to be different, he could still beat up a punching bag and just describing it as exerting negative energy, it's just a little disturbing in the way they describe it.

"Susan is a hair-trigger rage-machine!"

It's not hard to see the attraction to this short, with the simple childhood problems causing tempers to flare.  Mike, Kevin, and Bill do quite well here, with the over-the-top emotions on display, while the therapy can become a prime target for their perversion, to take the method of letting one's anger out and pushing it just a step too far.  Don't Get Angry is simple and short, and it has a lot of laughs.